VR and AR may finally realize their potential.

VR and AR may finally realize their potential. 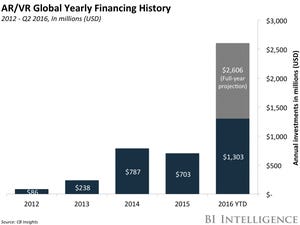 The augmented and virtual reality markets finally realize their potential

The growth in VR/AR eyewear stalled in recent years, following the high of 2016. Growth rates either declined or were sluggish in the years since, but 2020 is predicted to see double-digit growth for the first time in four years.

This is no doubt in part to the emergence of 5G, which makes for a better VR experience due to the reduction in loading times. VR growth has also been aided by the introduction of all-in-one headsets, which don’t require connections to video game consoles or high-end PCs.

But VR headsets may remain a niche product, even with 5G. Currently in 15% of homes, they remain expensive (with an average retail price of $349) and cumbersome, being a piece of equipment strapped over the head.

The real boost may be for AR. Increased internet speeds means post-2020 may see a real boost in AR adoption. Areas such as retail, which may use AR to project new clothes onto the user, and beauty could be first adopters of the tech from a consumer standpoint, as could TV shows and advertisers, with AR offering new ways for consumers to interact with a show or brand.

The year 2020 looks set to be another year of disruption for established media and entertainment companies. The emergence of new distribution channels and entertainment formats will create opportunities for innovative new entrants to disturb once-locked markets.

In particular, the potential that 5G will bring as its adoption grows will present the right set of circumstances for forward-thinking companies to become one of the first to market in areas which are set to boom in the coming years (AR, subscription gaming, 4K mobile video distribution).

Opportunities will be available for anyone willing to adapt to the new normal, unlike traditional media’s track record in the 2010s. Understanding the consumer trends within entertainment which point to money-making potential will become even more essential.