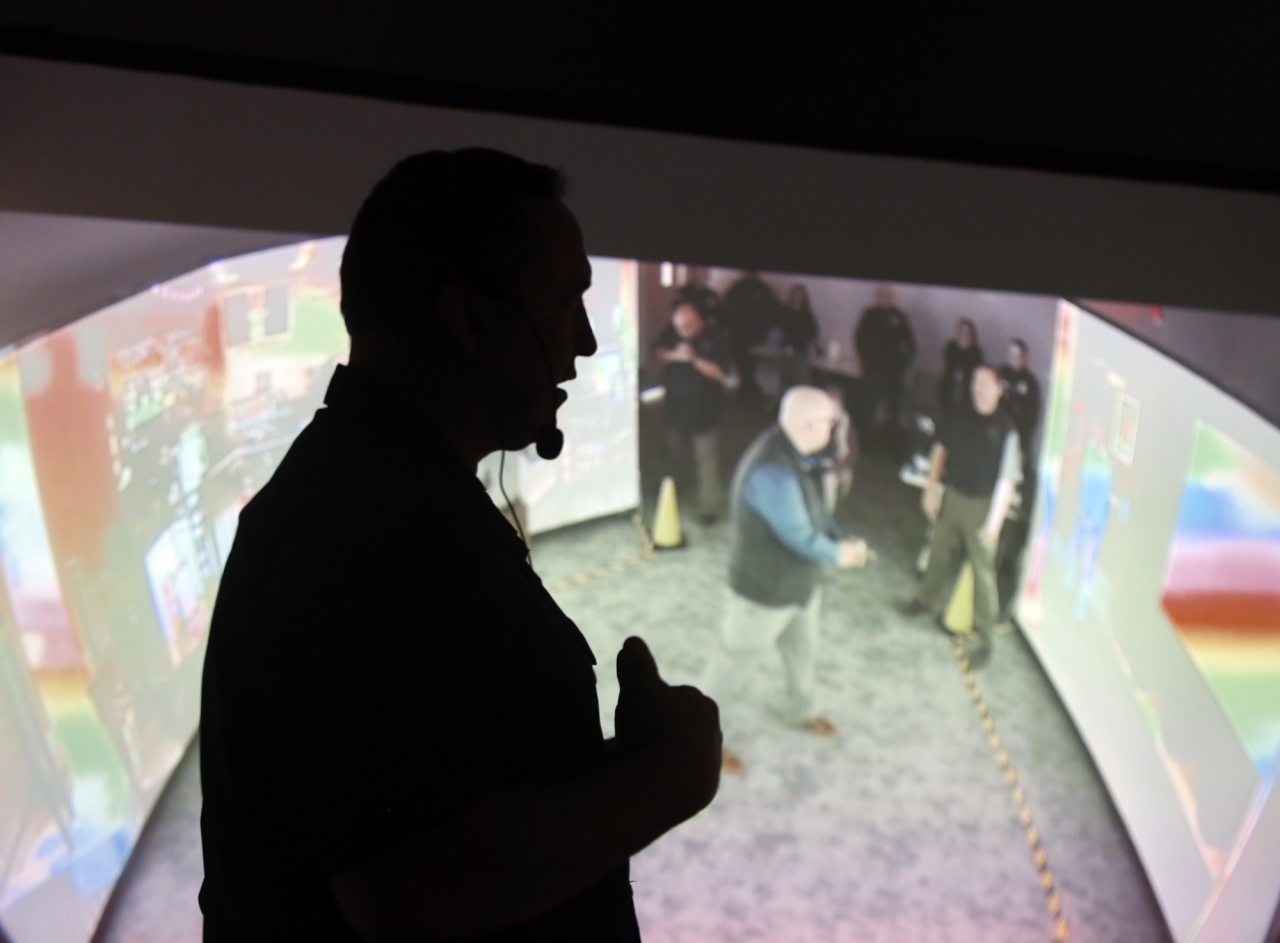 LOWELL — New virtual reality technology is in use at the Lowell Police Department, giving officers a more realistic training ground for what awaits them in the field.

Deputy Superintendent Mark LeBlanc said the program allows officers to prepare for the types of scenarios they may encounter during their shifts.

The scenarios include people with aggressive pets, responding to active shooter situations and dealing with people in crisis — especially ones related to mental health. The emphasis is on de-escalating the situations when they happen.

Police Superintendent Kelly Richardson said the department is able to program the machine to replicate places around the city. It gives members of the department a chance to familiarize themselves with locations before they are called to the scene.

As officers go through scenarios, a colleague chooses how the virtual people they are interacting with will respond.

LeBlanc said the goal is to keep the scenarios realistic but to also have officers prepared for anything. Although the new technology will not replace traditional training methods entirely, LeBlanc said some things are not easy to replicate without interaction.

“We’ll make those verbal commands at the range, you know, ‘put it down, put it down,’ but you’re yelling at a paper target,” LeBlanc said. “So this way, you’re actually getting responses and if you’re escalating the situation, the person will respond in kind, which is not the response we want. If you’re properly de-escalating, that’s what you’ll see when they read the scenario or respond.”

Lowell Police are leasing the equipment known as the VirTra V-300 for about $15,000. Richardson said the money came from the Law Enforcement Trust Fund, which is funded through drug forfeiture money, and he emphasized does not come at a cost to the taxpayer. It has also saved the department about half the money it would spend on ammunition used in training, Richardson said.

“I know it sounds expensive but obviously if we save one person’s life with this particular training it is worth it,” Richardson said. “To save the lives of the public and the officers, I think it’s a great investment.”

The new machine includes five large screens, which provide a 300-degree training environment. The cameras on the projector also record officers as they complete modules, allowing them to be used as teaching moments. Members of the department’s training committee brought the technology to him and he said it was a “no brainer” to pursue it.

Richardson said it is part of a broader effort of de-escalation and addressing mental health appropriately. The department is hoping to bring on four clinicians in the near future, which would allow for someone to be available during all hours of the day.

“When something happens, and someone doesn’t need to go to jail that needs help, we’ll have someone there for them. That’s what this training is all about today,” Richardson said.

LeBlanc said another advantage of the equipment is allowing officers to train while they are in the work mindset.

“You have a guy that’s working the overnight shift and he’s comes in here at 2 o’clock in the morning, he’s in the mindset that he’s in, in real time, as opposed to a lot of times those guys come into training during the day, right,” LeBlanc said. “So it’s not the same body dynamic that they do on their regular shift in terms of, being in the morning, 3 o’clock.”

As officers go through the training modules, they find themselves surprised by how immersive the experience is. The environment elevates the heart rate of participants and is capable of invoking an adrenaline response.

“It’s so real, they’re sweating, the whole nine yards and afterwards they say after something like ‘this is exhausting.’ They actually check their heart rates when they’re done,” Richardson said of his officers who have used the technology.

A Sun reporter and a civilian department spokesperson participated in an active shooter scenario on Tuesday morning, with both attesting to the physiological response.

Richardson said the goal is for every member of the department to go through every training scenario. Even more seasoned members of the department have found the trainings helpful, with Richardson receiving an email from one of his veteran officers thanking him for the experience.

Officer Alex Ramos said he “definitely sees the benefit” of the new training method. At first, Ramos thought the experience would be like a “video game,” but noted the scenarios resemble the calls he has been dispatched to over his 16 years as an officer. The most important difference with the new technology for Ramos is “seeing other human beings interacting,” he said.