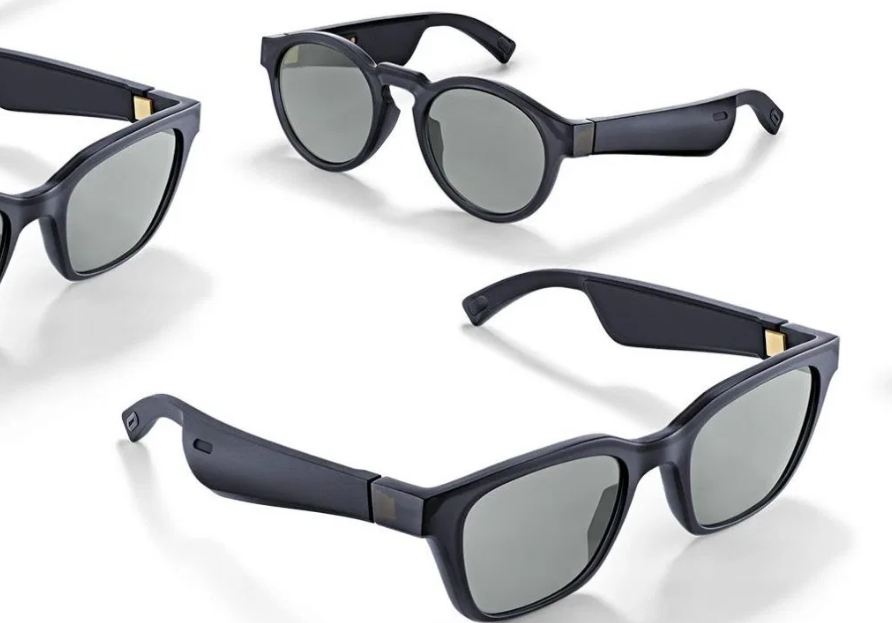 Above: A father and his son.

The most recent game from the team behind the emotionally evocative and autobiographical That Dragon, Cancer was built for a pair of sunglasses.

In The Other, players wear Bose AR Frames — head- and gesture-tracking sunglasses with built-in speakers — as they listen, look, and walk their way through a narrative game set in a dystopian future.

“The Other takes place in a fictional authoritarian dystopian city-state,” the developers at Numinous Games told GamesBeat in a group email interview. “A cultural revolution has mandated that those deemed ‘the other’ be rounded up and forced to conform under threat of death. Vigilante mobs dedicated to this cleansing roam the streets to enforce cultural conformity. You as the player are an “other” who has been offered safe passage out by a smuggler. Can you work together to avoid the mobs and escape the city?”

“This audio-only adventure game acts as an allegory for the ideological division in contemporary American society. We think it’s important to continuously ask ourselves the kinds of questions that shape who we are as a people in this country. We’ve been given tremendous liberty in this country, who should we extend those freedoms to? When and how should we risk our own freedom for others when see injustice around us? And, finally, can we do better?”

The team said they learned from their work on That Dragon, Cancer, that it’s more interesting to wrestle with the answer to the questions they ask they to presume they already know the answer .

While the story explores important, timely issues, it’s how players interact with the game that genuinely sets it apart.

Loaded on a phone, The Other uses the tech built into Bose audio AR sunglasses to detect which direction they are looking. It uses that information to track their movements through a simulated city spread across 20 virtual blocks and built using a 3D spatial soundscape. Players never see anything from the game; their phones can remain comfortable in a pocket or bag. Instead, they need to use spatial sound to avoid the dangerous mobs that roam the city by following in-ear navigation cues and the guidance of a mysterious smuggler.

The Other is out on Android, with a few issues that the team is still working to fix. The hope, Numinous said, is to add more stories to the game as well.

“It would be great to not only explore the limits of the technology Bose has made available to us with incredible audio fidelity, 3D spatialization, head gestures, and three degrees-of-freedom head tracking, but also explore more storylines in the dystopian future we hope never comes to pass.”

The Other is just one of 30 or so games either already released or in development for the Bose-powered sunglasses and a special pair of AR-enabled headphones, and Bose sees this blossoming of audio-centric experiences as just the start of a new sort of Bose experience.

The idea of embedded six high-end, finely tuned miniature speakers in a pair of sunglasses that could also track head movement came out of Bose’s desire to broaden its approach to sound.

“Premium sound is what we’re known for, but we’ve been thinking about what else we can do to help deliver value and new experiences to users,” said Chuck Freedman, who’s part of Bose’s developer relations team.

In 2018, Bose rolled out the prototype for Bose AR sunglasses at SXSW to “evaluate” the consumer and developer response, Freedman said.

“We wanted to see if these new kinds of devices — which had some level of sensors in them to inform the app where the user was headed, what direction they were looking, that could detect a range of movement — could help developers and creators deliver some more value,” he said.

“The feedback was extremely positive, and we decided to build out a platform and offer tools in terms of a software development kit and plug-in.” 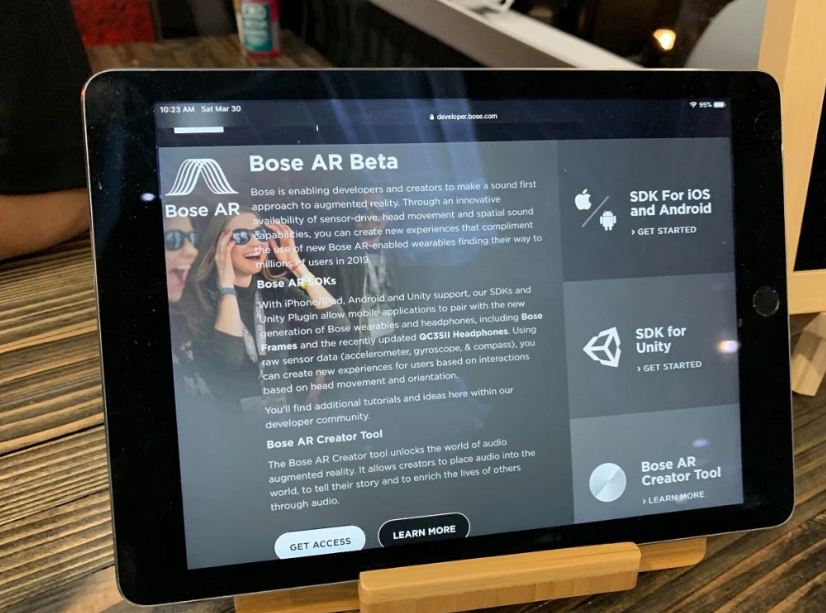 Above: Bose AR’s in beta on an iPad.

The new sort of experience was named audio augmented reality — or audio AR and Bose set about figuring out how best to make use of it. The idea, Freedman said, was to deliver new experiences with a “sound-first approach.”

The first devices to use the new tech were two pairs of sunglasses. The Frames, as Bose called them, both feature three tiny speakers built into each arm of the sunglasses as well as a single, small button and sensors that can detect movement and which way a person is facing.

“The feedback was tremendous,” he said.

The Frames use an open ear concept that allows a person to hear their surroundings, but also the music they’re listening to through the glasses. Couple that with audio tied to head movement, gestures, and location and the experience is surprisingly powerful. 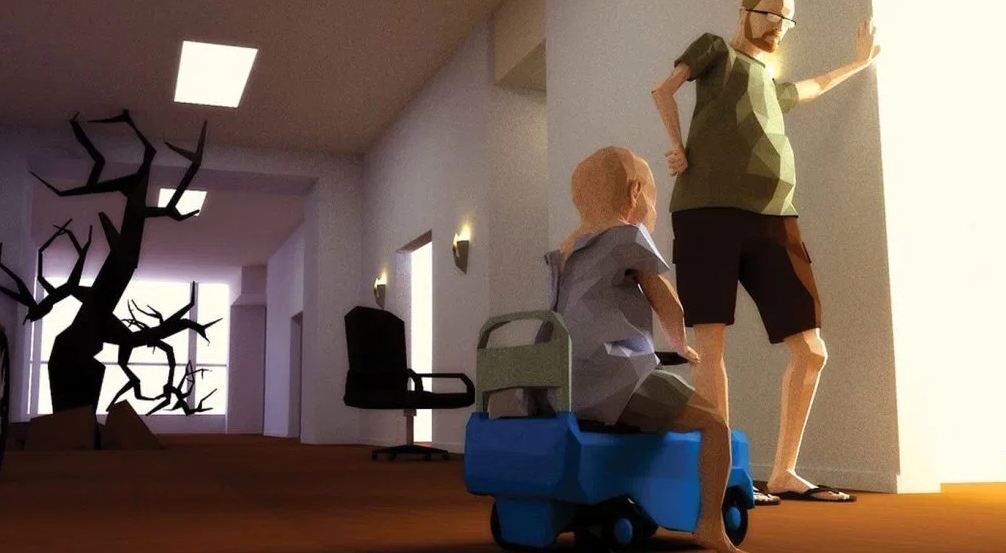 Above: The haunting imagery of That Dragon, Cancer.

The power of the human voice, a lesson learned through That Dragon, Cancer was what drew Numinous to Bose AR project.

“Because of that perspective, we’ve tossed around ideas for audio-only games and interactive experiences at Numinous for a while now. And when (Indie Megabooth founder) Kelly Wallick graciously told us about the Bose AR Jam, we jumped at the chance. The technology Bose is developing in their new flagship AR-powered products really takes audio-only game experiences to the next level. Audio-only experiences not only provide a new level of accessibility, but thanks to the new 3D spatialized audio solutions available today, they also add a new level of immersion and control that can ignite a players imagination.”

“Having spatial awareness through sound is something that is crucially important for any immersive game and storytelling experience,” they said. “The ability to track three axes of movement of the listeners head make the possibilities for audio-only games very exciting.

“This technology represents another facet of the immersive computing revolution. Designers in this space are already inventing entirely new haptic languages of interaction. We’ve seen incredible advances in the languages of touch, gesture, and visual user interface with mobile, VR and AR, but game middleware and platforms are only just now catching up on the language of audio as interface and input. Our experience using speech recognition as input has taught us there’s so much potential there.

“We think the future is bright for audio-based AR as long as the platforms are willing to partner with and empower developers to innovate.”